“We never said we would completely abolish it because we were unaware of the size of it at the time,”

Is this a U-TURN or the media are out to get him?

So is there a literal gymnastics going on here leading to misunderstanding of Labour party’s intention on Student debts Or did Jeremy Corbyn conveniently mislead the nation?

The student fees and debts, parts of various pronouncements that can be said to be among the factors that triggered a flurry of changes in opinion during the election campaign and ultimately derailed the Conservatives majority mandate bid are now under scrutiny.

The types of scrutiny labour and Mr Corbyn did not have to face during the campaign, thanks to the conservative party incompetence and failure to put any sensible argument forward because they were almost on permanent defensive mode since the launch of the two parties manifestos.

I said one of the key factors, there are a lot of factors, it will be unreasonable to say promises or alleged promises to students are solely responsible for propelling Labour’s swing but at the same time, we cannot underestimate their impact, with a reported quarter of a million under 25s registering to vote in a single day, but let us stay with this for now.

Generally, perception is stronger than reality; this is particularly true in politics and certainly in this case.

In my view, without a doubt, the perception Labour party as a whole gave the nation was that student fees would be scrapped and the existing debt would be wiped.

Labour Party leader’s interview with Andrew Marr yesterday 23rd seems to question this perception; this has lead to accusations of “U-TURN” and even lying and counter accusations from his supporters of media bias of deliberately misquoting him.

So, what did he say or did not say?

Let us take a step back and put the pieces together.

“Labour believes education should be free, and we will restore this principle. No one should be put off educating themselves for lack of money or through fear of debt.”

“Labour will reintroduce maintenance grants for university students, and we will abolish university tuition fees.”

THE NME INTERVIEW Before election:

“First of all, we want to get rid of student fees altogether”

“We’ll do it as soon as we get in, and we’ll then introduce legislation to ensure that any student going from the 2017-18 academic year will not pay fees”

“Yes, there is a block of those that currently have a massive debt, and I’m looking at ways that we could reduce that, ameliorate that, lengthen the period of paying it off, or some other means of reducing that debt burden”

“I did not make a commitment we would write it off because I couldn’t at that stage,”

“I pointed out we had written the manifesto in a short space of time because there was a surprise election but that we would look at ways of reducing that debt burden, recognising that a lot of it is never going to be collected anyway and try and reduce that.”

“We never said we would completely abolish it because we were unaware of the size of it at the time,”

Jeremy Corbyn general demeanour is that with him, we are entering a different era of new politics, and so an expectation of clarity is not out of order. 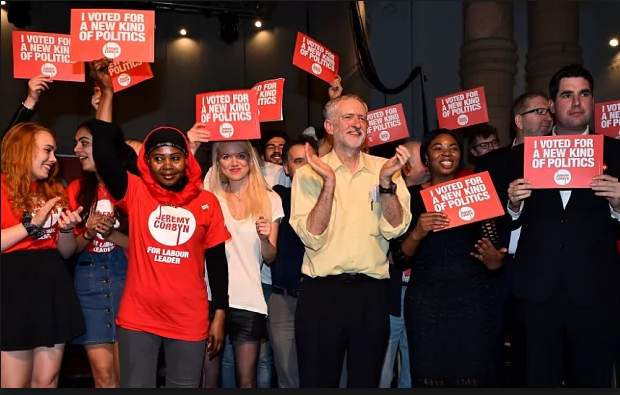 Any difference in the before and after?

Now, these are the statements during interviews before and after the election, leaving aside all the campaign rally rhetoric’s and other labour top figures like Angela Rayner and John McDonnell various declarations, going by these two interviews, there is definite backtracking going on here.

Saying prior to the election that “I’m looking at ways that we could reduce that, ameliorate that, lengthen the period of paying it off, or some other means of reducing that debt burden” and now say there was no commitment to write the debt off or the statements do not amount to any commitment is a definite change of tone.

He did not say categorically that he would wipe out the existing debts, but he definitely said he would deal with it. Anyone’s interpretation of “dealing with it” is open to debate.

Two things are striking in the interview with Andrew Marr.

Second, he said Labour was unaware of the size of the debt but still manage to create an impression they would wipe the debt off or at least part of it.

The question is if he has now admitted that the manifesto was written in short space of time and not thought through properly, how much of other promises made during the election campaign are in the same bracket of “not a commitment but a principle”?

What informed this backtracking or change of tone? It is difficult to tell but it is possible he needs to clarify his position now so as not to find himself in a more difficult situation in case another snap election happens?

One of the things that put the government on the back foot was the chant of a fully costed manifesto.

John McDonnell would remind anyone who cares to listen that Labour had costed its manifesto, unlike the conservatives.

Writing off students debt would be one of the most expensive items in that manifesto.

The obvious question is, how did you make provisions for this particular election pledge, ambition or promise, call it whatever name you like, without knowing the cost or size?

Cutting labour and Jeremy Corbyn some slack is in order here, the principle of free education at every level going forward is to be lauded and they have not so far backtracked and change tone on this and so the impact of this change of tone on the existing debt will not wipe out labour supports among students totally,  or at least, the impact is not likely to be as bad as it did on Liberal democratic party following their own tuition fee U-TURN and indeed, it may not actually have any impact at all.

Jeremy Corbyn may have sort to clarify his position and correct the wrong impression created during the campaign but it is a definite U-TURN and should not expect not to be challenged on it.