Vacates a high flying career in the US to relocate to Nigeria, then moved between two high profile position in Nigeria to take on a challenge no one has ever done in Nigeria.

Google CEO Sundar Pichai was recently in Nigeria where he promised to roll out plans to train 10-million people for digital jobs in Africa, Mark Zuckerberg also visited in 2016 where he met with several digital entrepreneurs.

Suddenly, the eyes of the world top digital giants are on Nigeria.

The sudden interest of these global internet giants in Africa and in Nigeria, in particular, was not by accident, there was a reason for it. Nigeria digital presence has grown in leaps and bounds, and it did so at a very steep rate over the last 10 years. This has improved or given birth to several online businesses, from Etranzact, Speedcast,  Konga, Yudala to Andela and then brought the likes of Uber that rely on reliable internet connectivity without which there is no business.

Thanks to Funke Opeke, the CEO and Founder of Mainone.

The Main One cable was West Africa’s first privately owned, open access submarine high capacity cable, which was completed in time and on budget. Funke Okpeke declares in an interview in 2012 with Isabelle Paradis.

A graduate of electrical engineering from the Obafemi University and an Alumni of Columbia University, New York where she did her Masters Degree in the same subject, Funke Opeke is someone that can be described as a veteran of digital and information technology business, having had a successful career that lasted twenty years in the industry in the US.

She rose to the position of Executive Director with the Wholesale division of Verizon Communications in New York and was involved in a start-up company in California called Sendmail at the onset of digital business revolution in silicon valley.

Sendmail is a general purpose internetwork email routing facility that supports many kinds of mail-transfer and delivery methods, including the Simple Mail Transfer Protocol (SMTP) used for email transport over the Internet.

THE BIG AND THE CRAZY LEAP:

Moving back to Nigeria from a cushy job as the executive director at Verizon to becoming the chief technical officer with MTN.

It can be argued that the role of a Chief Technical Officer with MTN was also a cushy job as well, so no big deal, but the terrain is different. having worked for 20 years in the United State and then moving to Nigeria in 2005 that was at that time, just six years into its young democracy from long and sometimes brutal rule under military dictatorship makes it a remarkable switch.

Funke Opeke moved to NITEL from MTN with the persuasion of Fola Adeola, the founder of GT Bank to oversee the acquisition of NITEL by Transcorp. She had a dream to make NITEL a national treasure and the vehicle to transform the way business and life, in general, was carried out.

Fola Adeola left NITEL frustrated, according to Aljazeera, but he left Funke Opeke with his word.

‘Funke, the moment this job is not fulfilling for you anymore, if there is anything you want me to help you with, you know where to find me,” Adeola says.

Funke Opeke dreams up Mainone as a result of the frustration brought on by bureaucracy at NITEL, even though she rose to the position of Chief Operating Officer of the organisation.

Like every highly successful entrepreneur we know or have read about, they almost all have one thing in common; ability to see beyond the present time or ability to identify opportunities where others cannot or are convinced it is not achievable.

Funke has this quality, and also the craziness to see not only the opportunity but to believe that she can ride the wave of all the challenges business environment poses in Nigeria.

In Nigeria, in 2008, she came up with the idea of raising a whopping $240m aimed at running a submarine fibre optic cable from Portugal to Nigeria, even Fola Adeola who gave her his word to come find him if she needs help think it was a crazy idea! He was reported to have said this is the type of project normally done abroad or by the big companies!

However, the contagious tenacity, determination and conviction came through and was able to infect Fola Adeola to come on board.

Today, Mainone is the backbone of most data communication networks in Nigeria and Ghana. The cable has landing points in Portugal, Ghana and Nigeria and branching units in Morocco, Canary Islands, Senegal and Ivory Coast and Main One signed an agreement with TATA Communications to extend TATA’s Video Connect Network into Nigeria through a strategic partnership.

To put this in perspective, Mainone cable is providing services for other service providers, the type of services provided by BT. Mainone is listed among of companies few in the world that have the submarine fibre optic capabilities, putting them at parity with AMERICAS-11 whose capable runs from the USA to Brasil en route the Carribean. 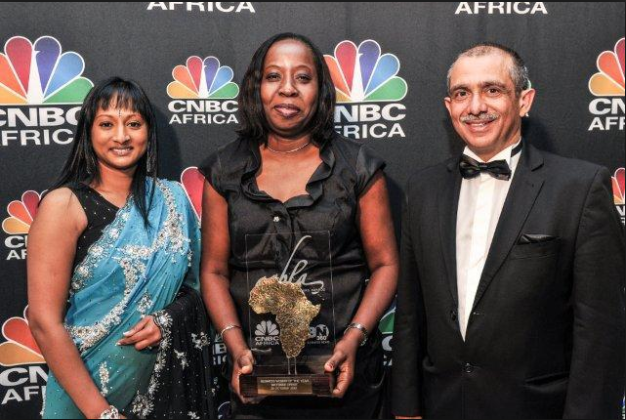 Funke Opeke at the presentation of one of her many awards

If you use internet services or internet banking in Nigeria today, it is very likely that your provider is relying on the services provided by Mainone cable.

Asked about the personality of Funke Opeke in a profiling documentary by Aljazeera, Ebi Atawodi, the general manager of Uber in Nigeria said something remarkable: He said When Uber organised a pitching opportunity for young entrepreneurs and she asked Opeke to be one of the investors, the Main One CEO postponed a trip abroad to be able to participate.

This remarkable because it is not often you see the combination of humble and success in our clime!

She is the most understated businesswoman you’ll ever meet, says Ighodalo, a lawyer and associates.

If she is an American, she would probably have several million tweeter followers like Elon Musk or Mark Zuckerberg or any other starters that caused a seismic change to the norm but she has 382. It worries me a little that she remain unsung and many young people are growing up missing out on the inspiration they can tap from this woman.