So, as it stands, while the diagnosis of HIV may well be possible, further test is still needed to be done before such is confirmed.

Contrary to reports in the Turkish media, former Arsenal’s right back Emmanuel Eboue’s HIV diagnosis is not yet confirmed.

The player is on his way to the United kingdom from Turkey for further medical examination.

Eboue’s agent Tekin Birinci confirmed the player his facing some medical problems but dispute the widely spread news that it has been confirmed he has HIV. 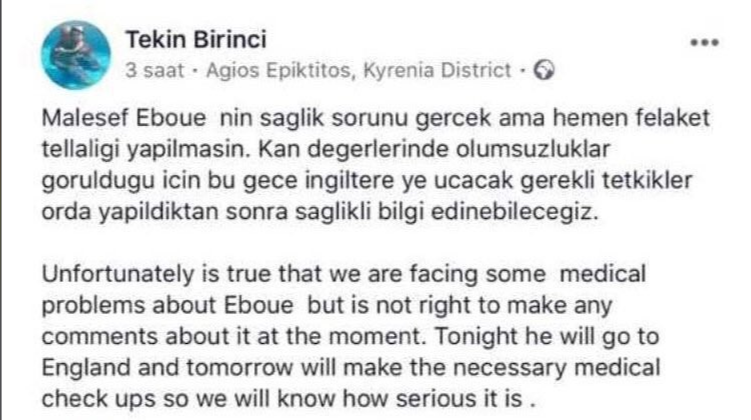 Emmanuel Eboue’s move to Northern Cypriot team Türk Ocağı Limasol is on hold after abnormal blood values were found during his medical.

Eboue was banned by FIFA for a year in 2016 for failing to pay his ex-agent fees to the tune of one million Euro.

“Eboue signed for a club and, as a normal procedure, we took him for a medical to check him out,

They found abnormal blood values so they didn’t issue the licence and we took the decision to send him to England to have medical check-ups there.

It’s wrong to say at this point he has HIV. Turkish news reports are wrong. I made it [Eboue’s situation] clear two days ago. Even if it will be true it shouldn’t be published like that.” Tekin Birinci

He told the Telegraph in December last year:

“There are times when I stay in my bedroom and don’t come out. One, two days in that room. Alone. I lock the door and am just thinking. I spend a lot of my time reading the Bible and will say, ‘Emmanuel, why are you doing that? It’s no good for your family’.

“My son Mathis is seven and plays for Arsenal’s academy. Every time I go there with him people ask me what’s going on and it makes it worse. ‘Emmanuel, have you retired?’ So I have to explain my situation. It makes me more depressed.” Emmanuel Eboue

So, as it stands, while the diagnosis of HIV may well be possible, further test is still needed to be done before such is confirmed.

All that is but certain at the moment is that former Arsenal defender Emmanuel Eboue is facing serious medical condition, following a failed medical test in Turkey where his blood returned abnormal values but specific diagnosis has not been disclosed nor confirmed.