Like majority of Arsenal fans, i take the position that Henry bears no responsibility whatsoever for Sanchez exit

Arsenal legend, Thierry Henry has taken to twitter to replied fans who are throwing abuses and jibes at him following Alexis Sanchez comments in his farewell message.

I know I don’t need to explain this to the majority of Arsenal fans but contrary to speculation at no time did I tell Alexis Sanchez to leave Arsenal. I had no idea he was going to sign for Man Utd until I saw it on the news like the rest of you. Thierry Henry

Sanchez insinuated in his farewell message that he came to the conclusion to leave after a conversation with Henry, who left for the same reason. 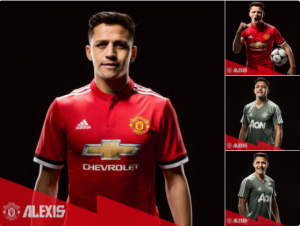 Alexis Sanchez Emotional farewell to Arsenal Fans and Staffs But Did Henry Played a Role In His Departure?

Since the message, Henry has face accusations of betrayal from fans, although some other fans have defended him and suggests that vituperation be directed at the club’s management for failures to hold down Alexis Sanchez to a new contract and lack of ambition.

Although Henry indicated he did not have to respond, but his legendary status at the club meant he cannot leave the misunderstanding unattended, there is no question about the idolization of the French man by Arsenal fans all over the World.

Thierry Henry has been in the game for long to understand the passion that comes with it, in the past 3 seasons, Sanchez has been the one shining light in the Arsenal squad, to lose him to a rival is bad enough, but to think that Henry could have contributed, even remotely to  Sanchez decision will hurt and people will react, however, on balance, i think fans negative reaction towards Henry is misplaced.

Henry, of course left Arsenal for Barcelona and went on to win a treble of trophies alongside Lionel Messi and Samuel Eto, so in a way, he achieved his longings for trophies, which at the time, it seems impossible at Arsenal. It remain unclear what the legend told Sanchez that the Chilean lashed on, but one thing is certain, Henry could not possible set out to hurt Arsenal or deliberately suggest to Sanchez to leave the club. He may have disclose his personal reasons for leaving Arsenal when he did and Sanchez subsequently took a queue from that.

Like majority of Arsenal fans, i take the position that Henry bears no responsibility whatsoever for Sanchez exit. He left for many reasons, including yes, Arsenal continued lack of ambition and contentment with mediocrity.

Sanchez would not be clamoring for a transfer if Arsenal is competing for the top trophies like the League or Champions League. Ok, granted, he left for Manchester United that has finished beneath Arsenal for the past four seasons, but United continued to invest in the team and it definitely look like it is now paying off and without a doubt will be in contention for the league next season, assuming that Manchester City will not throw it away this season.

Perhaps, the club should take responsibility for losing its top player on a cheap to a “rival” again.